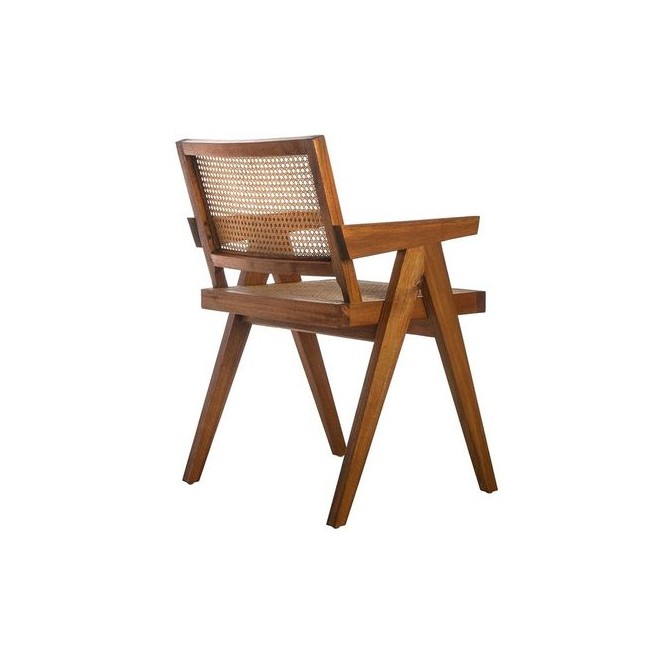 This «walnut wood and rattan cane chair» designed by Pierre Jeanneret is one of the most known chairs among the pieces of furniture of the Capitol Complex of Chandigarh, of which Pierre Jeanneret was one of the principal designers. The Pierre Jeanneret inspired office chair or dining chair in walnut wood and natural rattan is made of separate elements comprising a double asymmetrical «compass» type base. Two elements of the Jeanneret chair are joined by two spacers to converge and support the two walnut wood armrests. The natural rattan canes or mulching of the seat and an inclined backrest, slightly curved Inside a pretty walnut wood frame are characteristic elements of the spirits of the offices and the meeting rooms of the Capitol Le Corbusier in Chandigarh.

The Swiss designer and architect Pierre Jeanneret, born in Switzerland in 1896, has long been in the shadow of his illustrious cousin, Le Corbusier, real name Charles-Edouard Jeanneret.

He is however an artisan of early modern architecture with major projects and several pieces of cult furniture created in the company of the great names of French design such as Charlotte Perriand and Jean Prouvé. Pierre Jeanneret published a manifesto in 1926 «Five points of Architecture», with his cousin Le Corbusier, who played a major role in their architecture work as evidenced in their construction «the Villa Savoye»  (1928-1931).  However it was in India where he co-signed Chandigarh’s architectural masterpiece with Le Corbusier. The roles that Pierre Jeanneret may have played in the construction projects with Le Corbusier is sometimes downplayed. On the contrary, his work was decisive in the work of his famous cousin, which was classified as a Unesco Cultural Heritage site in 2016.