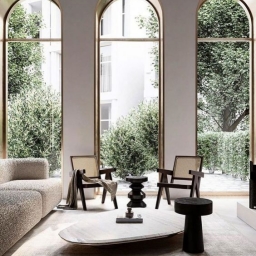 Philippe Starck is one of the world’s most respected post-modern designers; he has designed hotels across the world, from Tokyo to Pyla-sur-Mer, as well as restaurants in France, Los Angeles, and Venice. He is famous for subverting expectations, and whether he is using architecture or product design as his medium, Philippe Starck’s creations are forever pushing the boundaries of design to new levels.

Born in Paris in 1949, Philippe Starck rose to fame for redesigning the presidential apartments at the Élysée Palace. Since then, he has put his skills to countless projects, but it is his designer furniture that has captured imaginations worldwide for their boundary-pushing designs and bold aesthetic.

One of his most singularising innovations is the Louis Ghost Chair. Whether or not you have come across this post-modern design in the past, you might not know the fascinating history behind it…

All iconic chairs come with a fascinating history, but Philippe Starck’s Louis Ghost Chair goes back further than most: it has its roots in the 18th Century, during the reign of King Louis XVI and Queen Marie Antoinette. Back then, it was named Goût Grec (Greek Taste), for its allusion to neoclassical architecture, which became the fashion after the death of Louis XV.

The silhouette is easily recognised – elegant and geometric, with a rectangular seat, straight legs and arms, and an upright, oval shaped backrest. The chair diverged from the ornate Rococo designs of Louis XV’s period, and bore a resemblance to the Corinthian columns of the Ancient Greek world.

In Philippe Starck’s 2002 reinterpretation of the Goût Grec, we are given a fascinating apparition of history. On first sight, it is an entirely modern chair design – the use of clear or coloured polycarbonate seems to echo the futuristic – and yet, the profile remains true to the original 18th century design. Sleek and simplistic, it holds the elegance of neoclassic antiquity while bringing a modern accent to any room.

It is the nostalgia and versatility of this iconic chair design that has made it such a popular choice for anyone searching for a subtle touch of eclecticism in their home, restaurant, or hotel. Due to the

Philippe Starck’s designs are renowned worldwide for their beauty, ingenuity, and modernity. His ability to manipulate expectation, redesign history, and make manifest his dream-like concepts means that each and every design is ground-breaking and visually stunning. Whether you’re looking for a statement piece, or a statement room, be sure to view our range of Philippe Starck’s chairs and get inspired today.