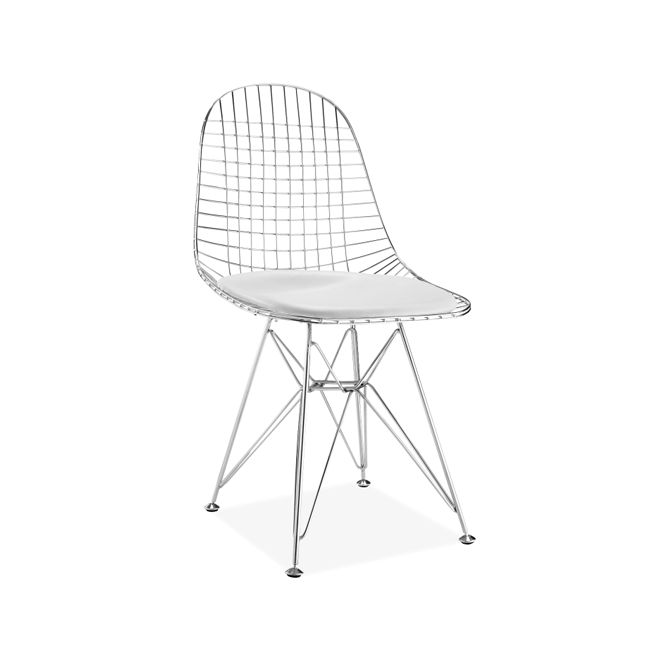 The resolutely ubiquitous art in the Eames inspired DKR chair

The Diiiz WIKA chair is a replica of the DKR chair designed by the d Charles and Ray Eames. Harry Bertoia was also involved in the creation of this chair, bringing different knowledge of metalwork. The Eames/Bertoia DKR chair was produced in 1951 and marketed by Herman Miller

The structure of the Charles Eames inspired WIKA chair and its ‘Eiffel Tower’ base are in polished chrome steel.

The seat of the reissue of the DKR chair by Eames is a classic leather cushion. The metalwork of the Diiiz DKR seat does not take away from its comfort and will find its place in a workplace, restaurant or in your home!

Designed by the Eames couple in the 50s, this range has contributed to the design of modern architecture and inspired other famous designers including Harry Bertoia and his famous ‘Diamond Chair’.

With the modern DKR chair, Charles and Ray Eames promote the theme of a single piece shell with organic lines and combining transparency and lightness. They were the first to use a welded, steel wire structure.

The main advantage of the Eames inspired WIKA chair is the perfect relationship between the base and the shell. Indeed the reproduction of the steel DKR chair is designed with the same materials, so the lines intertwine, coming together to create a uniform, consistent, and united optical effect.

Throughout the history of 20th century design, the designer couple Ray and Charles Eames are undoubtedly key figures in the world of furniture design. Moreover, their creations continue to be very popular design objects and are in demand even today.

The designer couple, Charles and Ray Eames designed a series of chairs in chrome wire such as the DKR chair. Their design was carefully crafted: in fact the chrome wires were used to alter the single piece shell from the previous plastic model. The Eames inspired DKR chair is recognisable by its network of rods, which evokes images of the Eiffel tower with its assembly of metal rods which make up this chair.

A flawless, light and transparent design gives the Eames inspired DKR chairs the opportunity to easily integrate in any interior, public or private spaces, waiting rooms, conference rooms, or even bars/restaurants.

The Eames inspired WIKA chair is a sign of great enthusiasm, it is a flagship product in international design history. Immediately recognisable, the replica of the Eames DKR seat is now one of the most popular classic models for design enthusiasts.

This replica of the Eames WIKA chair is remarkable, for its design, innovation, modernity, solidity and timelessness. All these elements characterise the Diiiz DKR chair, which make it an admired and coveted chair, from the 1950s to the present day.

The Eames DKR chair is offered by Diiiz in chrome steel and the cushion of this metal chair is available in several colours.