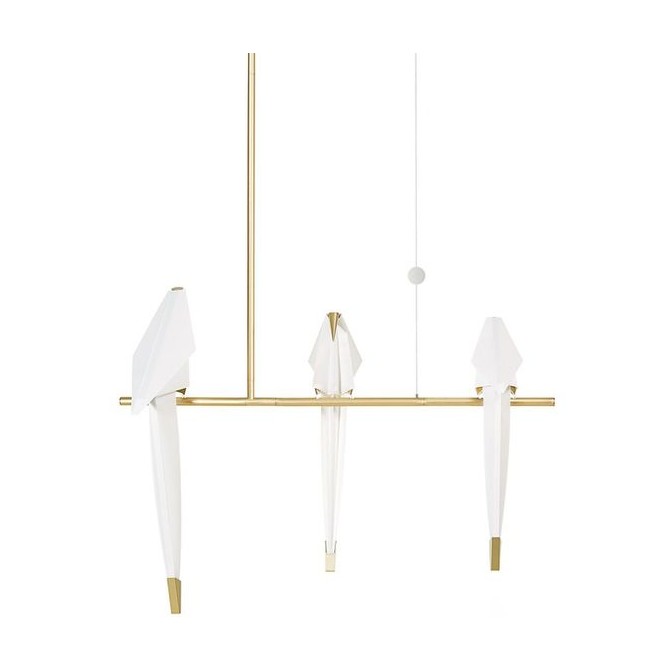 The pendant lamp Umut Yamac inspiration Moooi is available with 1, 3, 4 or 5 birds. This origami ceiling lamp shows a technical prowess that gives it an aspect of lightness and elegance.

This perched bird light was originally created by designer Umut Yamac and was inspired by Japanese origami.  Diiz presents a reproduction of this high-quality Moooi Perch Light.  In addition to its unique style, the origami bird light also demonstrates technical prowess.  This Perch Light inspired by Umut Yamac is made of metal and features five origami-style birds giving it a feeling of grace and elegance.  The Diiz “Perch Light” Origami Bird Light measures 130cm in height and 112cm in width and uses 5 x 7.5W LED bulbs.

The Perch Light is also available in one, two and four bird pendant light models.  There is also a Moooi Bird Floor Lamp version.

These Origami Bird Pendant Lights are now available at a low price from Diiz, for all lovers of design.

The Pendant Perch Light was created by Umut Yamac, a British designer inspired by his observations of nature.

Umut Yamac is a young architect, born in 1980, and a graduate from the prestigious Bartlett School of Architecture.  He opened his design studio in 2011, shortly after graduation, to focus on designs that satisfy both the needs of the user and of the space where they will be displayed, through playful and moving objects.  The Moooi Perch Light is a prime example of his unique style.

With the Moooi Perch Light, Diiz allows you to decorate your interior and think outside the box whilst doing so.  This Moooi Pendant Perch Light will establish your personality in your restaurant, business, or boutique hotel by adding an element of high design.